Both major parties are talking a big game about opportunity at the moment. When I look back on my own opportunities I can draw a straight line to a handful of things: free school education (which I largely wasted), a cheap student loan, a small European Social Fund bursary that meant I could do an MA and access to the public library system.

I grew up in Gloucester in the West Country. On the whole I f**king hated it and couldn’t wait to leave. In fact, I haven’t ended up far away although I have ‘levelled-up’, living 10 miles away in the leafy, gentrified and smug (data point: has its own jazz festival) town of Cheltenham. There’s a probably apocryphal tale of a homeless guy from Cheltenham who was offered a house in Gloucester but chose to stay living under a bridge because it was a better neighbourhood.

I still go to Gloucester though because my kids do music and swimming there. The last 3 decades have not been kind to the City so I normally pass through there with my nose in the air. But the other day I had a few hours to kill, lots of work to do and – crucially – needed an internet connection. So I went to the library.

If you’re reading this, you probably have a library card – you may have lost it but the chances are you have one, along with 60% of the population. Local authorities spent about £840m in 2019-20 against income of £71m. So each month libraries cost about £0.92/person in the UK.

Why does that matter? Since the pandemic visits to physical venues have been hard to analyse but pre-Covid, libraries in England, Wales and Scotland had 215 million physical visits: about the same as the Premier League, the cinema, and the top 5 UK tourist attractions combined. 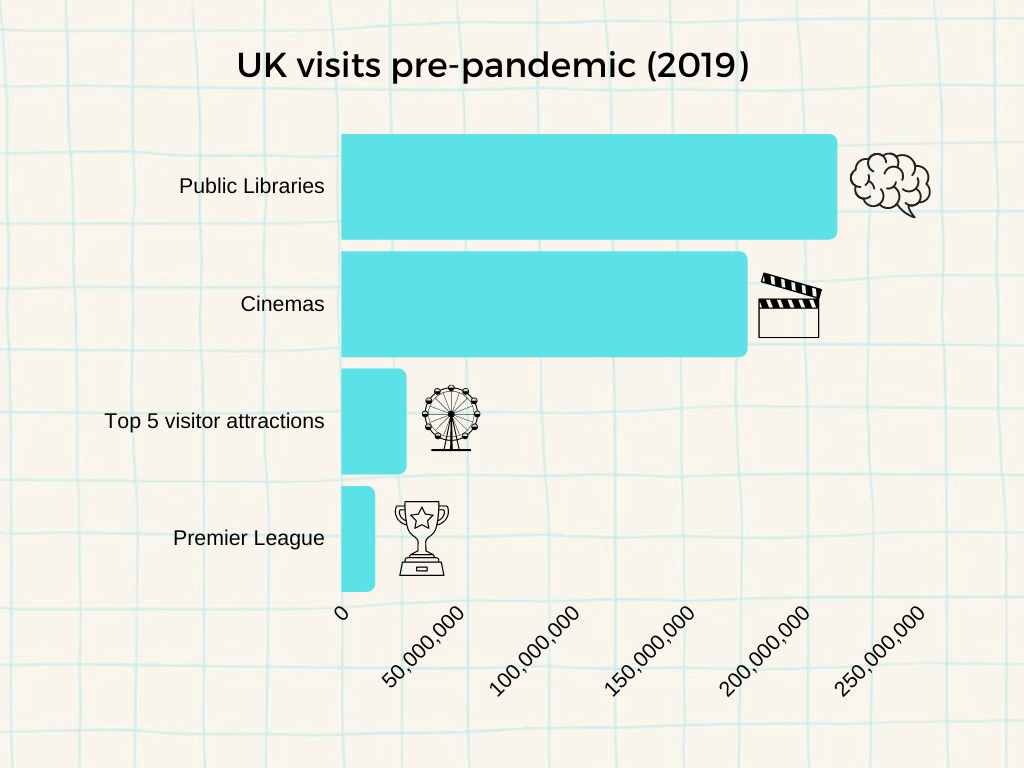 I’d assumed that libraries were becoming a relic of the 20th Century, made obsolete by streaming services, Amazon and the internet generally. To my great surprise there are over 100 people in there (I counted), including lots of young families borrowing books and DVDs. The tables are full of teenage school kids and students from the local college. There are 20 internet terminals and 12 of them are occupied. There’s also a drop-in centre for UK visa and citizenship applications (sadly outsourced to a ‘strategic supplier’), a local council advice centre and a warm bank.

Ironically, despite my love for public services, I’d forgotten that I used to rely on this exact place for knowledge and entertainment. I would come here all the time as a kid and load up on the sci-fi books I craved. Round the corner was the music and drama library where I found out about the artists that I didn’t know existed and borrowed the music that I couldn’t afford to buy. Just up the road is the Guildhall Arts Centre where, as a teenager, I started my social life and went to see comedy, gigs and films.

There’s a true-ism in public services that acute interventions are insanely expensive while early support and prevention is surprisingly cheap. Libraries are cheap and on the evidence in front of me still highly relevant to local communities. They may not be as exciting as ChatGPT but they keep people connected, entertained and – in some cases – safe. They promote opportunity and they’re entirely democratic. That probably means we should pay more attention to them and other frontline services like them and a bit less to the Westminster bubble and the dumpster fire of social media.

Original insights & digital government inspiration from around the world, every two weeks.